When does the French Revolution timeline begin? Most encyclopedias date the beginning of the French Revolution to the morning of July 14th, 1789, when a group of workmen broke into the Bastille prison, secured weapons, and freed the remaining political prisoners from their cells. Since the storming of the Bastille was a landmark event which sparked a time period leading to France's eventual independence, Bastille Day is celebrated annually in France until today.

However, most historians note that the French Revolution was the direct result of an earlier time period known as the Enlightenment, which began in the mid-1700s. The Enlightenment marked a major philosophical shift from regarding the Bible and church as the authoritative source of absolute truth to embracing human reason as the source of truth. According to these sources, the French Revolution timeline actually began during this earlier "Age of Reason." 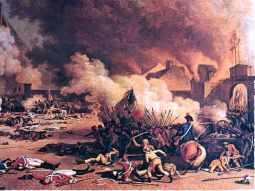 Among the most prominent Enlightenment philosophers was Jean-Jacques Rousseau (1712-1778). Although he died 11 years prior to the Revolution, it is believed that his writings and his rejection of Calvinism and Christian theology had a major influence on the revolutionaries who later fought to remove Christianity from France.

Indeed, over the duration of the French Revolution timeline France underwent a massive transformation, going from an absolute monarchy and aristocratic system to the development of a people's government, viewed by historians as a shadow of today's modern governments. Similarly, the religious system and the domination of church over state fell to the new ideas of enlightenment, including citizenship and the inalienable rights of the people.

Prior to the storming of the Bastille, the French middle and lower classes were deprived of power and of a voice. The church and the state repressed religious dissenters, owned much of the land, and imposed heavy taxes and tithes on the people. Meanwhile, the higher clergy and monarchy enjoyed a life of luxury and wealth. Faced with poor economic, social, legal, and political conditions, the French lower classes staged a popular revolution against Louis XVI.

In 1789 the Third Estate, comprised of French peasants, workers, and members of the middle class, formed the National Assembly, which made the following changes in France:

Although Louis XVI remained monarch, he was removed from Versailles to Paris, where he was kept under house arrest. On September 2, 1792, the monarchy was abolished and France became a republic. Subsequently, in 1793 Louis and his wife Marie Antoinette were beheaded for crimes committed.

Finally, it can be said that the French Revolution timeline officially ended when a powerful general, whom we all know as Napoleon I, returned from war and became the new leader of France.

Art of the French Revolution

Summaries on the French Revolution