What was the French Revolution?

What was the French Revolution? The French Revolution was a turning point in French history. Although many date its beginning to the storming of the Bastille prison on July 14, 1789, others say that the storm had already been brewing since the mid-1700s and the period of the Enlightenment. It was during this "age of reason" that a shift in thinking began to take place, wherein the predominant view of the Bible and the church as the authoritative source of truth was replaced with a greater regard for human reason and intellect. In commemoration of the storming of the Bastille, which is considered a landmark event which ultimately led to French independence, Bastille Day is celebrated every year in France until this day. Moreover, the changes in France are thought to have created the foundation for change in many other countries across Europe and North America, where the people were emboldened to fight for their rights after witnessing the victory of the French underclass. 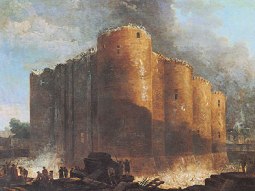 What was the French Revolution? It was a monumental event which set the stage for ideas of liberty and equality to be put into practice. On August 26, 1789, the Declaration of the Rights of Man and of the Citizen came into being, stating that "the source of all sovereignty is located in the nation; no body, no individual can exercise authority which does not emanate from it expressly." The French peasantry no longer had to pay crippling taxes and tithes to the crown. Church land, which had comprised almost a fifth of the area of France, was confiscated, becoming the property of the state. Furthermore, with the enactment of the Civil Constitution of the Clergy in July 1790 by the National Assembly, the newly formed political party of the people, bishops now had to be elected by the ballot and the Pope's power was significantly reduced.

What was the French Revolution? It was the catalyst credited for creating a new social and political order in France, where the good of the people and the community at large took precedence over the welfare of the minority elite of kings, nobles, and bishops.