Marseille monuments, museums, beaches, shopping, and nightlife are only some of the many attractions awaiting you in the bustling city located on the Mediterranean Sea. Not only does Marseille boast the second largest population in France next to Paris, but the city is home of the country's largest commercial port and a stunning harbor. In ancient times it was the Greeks who traded at this port, bringing grapes to Marseilles and planting the roots of the illustrious French wine industry of today.

What makes Marseilles the perfect vacation destination and one of the most popular cities visited by tourists is its blend of the old with the new. While le Vieux Port, Le Panier, and Marseille monuments pay homage to the history of the city, its nightclubs, hotels, discos, theater, and trendy shopping make it relevant for the 21st century. And if you are visiting Marseille in the summer, you won't want to miss the traditional annual festival called the Marseille Carnival. In fact, Marseille is famous for its renowned festivals, including a music festival, Festival of the Wind, and the Marseille International Documentary Film Festival. 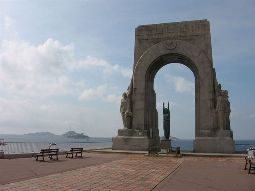 By far the landmark icon as well as the highest point of Marseille is the Basilique Notre Dame de la Garde, a 19th century cathedral built in a Roman-Byzantine architectural style. The entire basilica is covered in gold leaf, while the main attraction is the astounding 36-feet high (9.7 meter) statue of Virgin Mary standing atop a bell tower. Bullet marks, located on the northern façade, are testament to the fighting which occurred during Marseille's 1944 Battle of Liberation. A second Roman-styled cathedral built in the 5th century and deemed today a World Heritage Site by UNESCO is the Basilique St. Victor, while other Marseille monuments and museums include the Mazargues War Cemetery, dedicated to the fallen soldiers of World War I and II, and the Musée d'Histoire de Marseille, an archaeological museum devoted to ancient Greek heritage and culture.

On a lighter note, be sure to visit one of Marseille's most impressive attractions, the Palais du Pharo. Featuring flourishing gardens and an exquisite interior, the palace was built by Napoleon III and donated to the city by Napoleon's wife. And if you have had your fill of history, cultural lessons, and Marseille monuments, take time to enjoy the multitude of restaurants, cafés, operas, music, and shopping Marseille has to offer. For world-class shopping, but sure to hit the following fashionable streets: