A look at the early history of France stands in sharp contrast to the modern-day country most of us are familiar with today. What you may not know is that France is seeped in a rich history dating back to before the Common Era (BCE). Years ago, what we know as Paris today was merely a fishing village located along the River Seine, a strategic position for controlling river trade.

Similarly, far removed from the contemporary image of France as a tranquil travel destination, the early history of France paints a much darker and tumultuous picture. Many centuries ago France was ruled by the ancient Romans, invaded by Attile the Hun, and attacked by Viking raiders. According to historians, in 885 France suffered a massive Viking invasion numbering 700 ships and 30,000 men. However even as far back as 987, when the Capetian Dynasty was founded, Paris was and remains until this day the capital city of France. 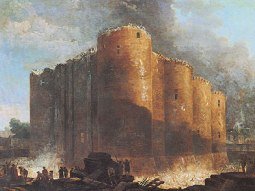 If you are like most people, when you think of the early history of France what comes to mind is the French Revolution of the 1800s and France's transformation from an absolute monarchy into a more democratic system of government and from an aristocratic system ruled by the state and church to a system of equality wherein French peasants and the middle class were eligible for citizenship and rights.

However, France and many of its famous monuments originated much earlier in time. The illustrious Cathedral of Notre Dame de Paris, for example, was built in 1163 in an area of Paris know as the Ile de la Cite. In 1180, when Philippe Auguste became king, he began the construction of the Palais du Louvre and began his project of paving the streets. The Hundred Years War followed, wherein 14th century France was riddled with political violence, uprisings, and the outbreaks of plagues. In 1420 France was captured by the British; however by the mid-1400s it was French King Henry IV who took up residence in Paris and undertook several construction projects, among them to expand the Louvre and build the Saint-Louis Hospital.

In 1804, at a ceremony inside the Notre Dame Cathedral, Napoleon crowned himself Emperor. By 1814 the Russian and Austrian armies had invaded France, which fell to the Russians, marking the first time in 400 years that France was subject to the rule of a foreign power. However the country was subsequently retaken by the French and has since continued to grow and expand.

Today France is home to myriads of monuments, historical sites, and architectural marvels reminiscent of both the early history of France and its later years. However if you are planning a trip to France, don't forget to include some fun activities such as sun-tanning at a French Riviera beach, hiking or skiing in the French Alps, and tasting wine in the legendary Bourdeaux region.