If Tour de France facts are what you're looking for, you've come to the right place! From the best-known information to the least-known trivia, here is where you can find out all you've ever wanted to know about the Tour de France - and more.

For the average person, Tour de France facts begin and end items such as major cycling event, the month of July, Lance Armstrong, yellow jersey, and Paris. Of course, these refer to the fact that the Tour de France is the largest and most prestigious cycling race in the world which takes place annually in July. While there have been several five-time champions, to date there is but one seven-time Tour de France winner, Lance Armstrong of America, who won the event consecutively between the years 1999-2005. What made Armstrong's accomplishment even more incredible is the fact that he achieved this feat after recovering from cancer and being given only a 40% chance of doing so. 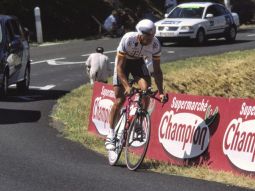 The yellow jersey, or "maillot jaune," is the shirt awarded to the rider having the lowest aggregate time at end of each stage of the race. Although winning each stage is considered a major victory by itself, the ultimate prize is awarded to the person who reaches the finish line - which is located in Paris - in the least amount of accumulated time.

Now that you're up to speed on the best-known Tour de France facts, see how many of the following pieces of trivia you are familiar with.

If you like numbers, here are some interesting Tour de France statistics: