Understanding the Tour de France and why the Tour captivates such an enormous audience requires an explanation of some basic terms and Tour de France rules and regulations.

First on the agenda in understanding the Tour de France is learning the difference between sprinters and climbers and other team roles. Within each nine-member team there is a team leader who is considered the contender for winning the race. Sprinters are strong cyclists who specialize in the winning the secondary race of the Tour known as the Point Competition. The cyclist who accumulates the most points for sprints wears the green jersey. The domestique are riders who protect the leader by blocking the wind, stopping breakaways, and fetching food and water for the team. Climbing specialists focus on winning the Mountains Competition and the polka dot jersey. 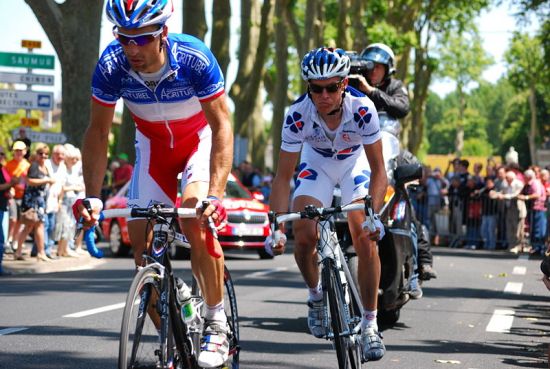 Of course, becoming familiar with the yellow jersey (maillot jaune) and what it signifies is a crucial element to understanding the Tour de France. Each day, the rider with the lowest accumulated time over the day's stages is honored with wearing the prestigious yellow jersey, identifying him as the overall Tour leader. The lowest accumulated time is technically known as GC or General Classification. On the last day, the cyclist who crosses the finish line with the lowest GC is declared winner of the Tour de France.

The next item of business in understanding the Tour de France is learning how the scoring system works and knowing what the various 'stages' are. The race is divided into stages, each of which features a certain type of terrain (i.e. flats, hills and mountains, sprints). The first cyclist to cross the finish line in any given race wins that stage. The "prologue" is a short, individually timed trial which takes place before the official race begins in order to determine the starting positions for the first stage. There are also "individual time trials," wherein each cyclist races alone to achieve the fastest time over the stage, and "team time trials" (TTT), referring to races involving only the nine team members. The team time is recorded when the fifth team member crosses the finish line.

Having trouble understanding the Tour de France and terms such as "peloton" and "breakways"? Have no fear; help is here!

Peloton: Cyclists form a peloton, or a large group of racers, in order to maximize the efficiency of the team. For example, cyclists in a peloton attempt to reduce wind resistance by "drafting" off other racers. Since leading the peloton is extremely draining, team members take turns in the lead.

Breakaways: Breakaways and chases are exciting components of the Tour de France. A breakaway is when a few cyclists go ahead of the pack in an attempt to hold on to a lead and win the stage or sprint. However members of an opposing peloton can chase them down before they reach their goal. In the past, an efficient peloton has been known to upset major breakaway leads.

Finishes: Assuming no breakaways, a peloton will "bunch sprint" at the end of a stage or "lead out," wherein sprinters draft behind a teammate to put him in position to win just before the finish line. To prevent dangerous pileups on final sprints, all cyclists who finish within one bike length of the team are given the time of the first racer.

Stage Wins: Not all riders are contenders for the Tour de France title, however it is considered highly prestigious to win a stage of the race. Furthermore, winners of intermediate sprints and single stage wins achieve 'bonus' time reductions for the top finishers, which can ultimately determine who wears the yellow jersey at the end of the day.

For more information on understanding the Tour de France, pick up a Tour de France guidebook or go online where you should be able to find many facts, figures, and items of trivia about the world's most popular cycling event.