Who Is Mona Lisa?

The question, who is Mona Lisa, has been the lifelong occupation of art scholars, historians, and artists ever since Leonardo Da Vinci painted the masterpiece in 1506. Yet until today the answer remains as mysterious and enigmatic as Mona Lisa's smile itself. In fact, it is estimated that the number of theories and conjectures regarding her smile could fill the shelves of multiple libraries. Is Mona Lisa's smile happy? Ironic? Sad? Computer programs have even been used recently to analyze Mona Lisa's smile and to determine its underlying emotions. Additional long-standing questions regarding the portrait include Da Vinci's original intention and the choice of setting and the stationed position.

However far more controversial has been the ongoing debate regarding: Who is Mona Lisa? Theories about the identity of Da Vinci's model abound. Some claim the subject was Leonardo da Vinci himself, painted in a female form. Others argue that Da Vinci's assistant, Salai, posed for the picture, citing as evidence the view commonly held by Renaissance painters that men should lack the usual characteristics associated with masculinity and maturity. Acquaintances of Leonardo, including Costanza d'Avalos and Isabella of Aragon, were also postulated as possible models. Yet the most validated theory and accepted answer to the enigma of who is Mona Lisa is a woman by the name of Lisa Gherardini, who was 24 years old and the mother of two at the time she posed for the painting. 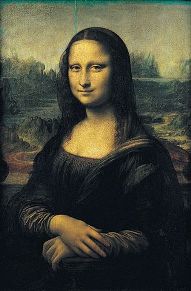 If you - like kings and emperors of yesterday and like millions of art enthusiasts today - are fascinated by the Mona Lisa, here are some little-known facts about the most recognizable portrait on earth:

While the answer to the enigma of who is Mona Lisa may always remain a mystery, one thing is for sure: The face of Mona Lisa has come to epitomize art. Wherever you go, you can find T-shirts, mugs, calendars, and other paraphernalia sporting her famous smile. Further, pictures of Mona Lisa have become pop culture art on magazine covers and in drawings by Warhol and Botero. If you would like a copy of this iconic picture hanging on your walls, simply purchase one of thousands of reproductions sold everywhere.