If you're looking for a Mona Lisa drawing to hang in your home or office space, you won't have to look far. Thanks to the international attention which the Mona Lisa has attracted and the years of research and debate that have gone into analyzing the nature and meaning of Mona Lisa's mysterious smile, numerous artists have tried their hand at reproducing the portrait. In fact, hundreds of copies of the portrait are actually hanging in different art galleries around the world, many of them claiming to be the original.

If you an amateur or aspiring artist and you want to create your own Mona Lisa drawing, there is a new phenomenon sweeping the Internet, in the form of a video which demonstrates how to use the Microsoft Paint tool to draw the Mona Lisa. Furthermore, the ability to successfully copy the Mona Lisa has long been considered a true test of an artist's skills and talents. 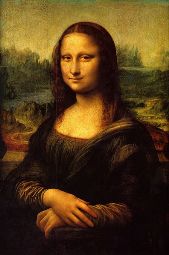 For centuries, ever since Leonardo da Vinci created the masterpiece in the early 1500s, the portrait of the Mona Lisa has been scrutinized, analyzed, and picked apart by art critics and art enthusiasts alike. If you take a close look at the original Mona Lisa drawing, you can actually see the numerous styles of art that went into the masterpiece. First, the Mona Lisa was drawn using oils on poplar wood panel. The lighting used is said to have created a number of geometric circular and spherical shapes which compose the painting. Resting upon an armchair, her posture is reserved and silent, creating a sense of distant between the painting and its viewers. While everything around the Mona Lisa is dark, her face is lit up, drawing the viewer's eyes to her face, and especially to her eyes, which are described as meeting the gaze of the observer.

An up-close view of Leonard Da Vinci's Mona Lisa drawing also reveals the sfumato artistic technique, of which Da Vinci was a master. The sfumato technique is comprised of tiny dots, layered over and over again in relating tones, effectively giving the appearance of an absence of lines. Over the ages, everyone from artists, historians, psychologists (Freud), scientists, sociologists, university professors, writers, and lay people have been offering up their theories of what Mona Lisa's smile means. A computer program was even designed in 2005 to analyze the facial expressions in the portrait, which ultimately concluded that the Mona Lisa was "happy."

Whether you travel to Paris' Louvre Museum to see the original, whether you buy a reprint, or whether you create your own Mona Lisa drawing, there is no doubt about it: The Mona Lisa is in an artistic class of its own and will never go out of style.