Every summer, French Open winners claim victory to one of the most exciting and grueling Grand Slam tennis competitions which take place every year. If you are traveling to Paris, France between mid-May and early June, be sure to book tickets for the French Open or "Tournoi de Roland-Garros." The tournament lasts for two weeks, takes place in the Roland Garros stadium, and is a fan favorite. In fact, every year thousands of tourists and tennis fans descend on France's capital for the much anticipated event. Since Paris hotels fill up quickly, be sure to make reservations well in advance if you want to stay close to the action

If you're a newcomer to the world of professional tennis, here is some basic information about the four major tournaments held each year, as well as names of some of the best-known French Open winners in recent and past years.

The four annual Grand Slam tennis events, in the order in which they are played, are: the Australian Open, the French Open, Wimbledon, and the US Open. A player winning all four tournaments earns the title Grand Slam winner. If a fifth victory is added, that of the Olympic Gold Medal in tennis, the player achieves a Career Grand Slam. 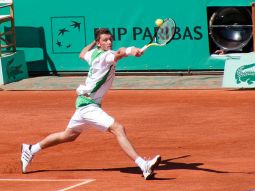 Each tournament has its own special characteristic. The French Open is the only tournament played on a clay court, while Wimbledon is played on grass and the remaining two tournaments are played on hard courts. The difference between France's clay court and the other Grand Slam surfaces becomes especially important in determining French Open winners when considering individual playing styles. Certain surfaces have tended to suit certain players, such that tennis pros who succeed on one surface don't fare as well on another. Roger Federer, for example, has won every Grand Slam singles title except for the French Open. On the other hand, Rafael Nadal of Spain won five successive French Open tournaments, earning him the nickname "the King of Clay" from his peers. Nadal later went on to achieve the rare feat of a Career Grand Slam, an honor also earned by Andre Agassi of the USA.

Historically, the French Open originated in 1891 when it was called the Championat de France International de Tennis. It started as a men-only affair, but later went on to allow women to join. Similarly, in 1968 the French Open became the first Grand Slam tournament to permit both professionals and amateurs to compete, thereby earning the name "Open." In June 2010, two unlikely female tennis players went head to head for the French Open title. The favorite, Australia's Samantha Stosur, had already beaten top-seeded players Justin Henin, Serena Williams, and Jelena Jankovic to reach the finals. However at the end of the day it was Italy's 17th-seeded Francesca Schiavone who walked away with the victory, making her one of the few under-top-10 players in French Open history to win a Grand Slam event.

Today tennis fans and visitors to France can enjoy some off-court attractions as well. The Roland Garros Museum (also called the Tenniseum) houses several exhibits and artifacts, while its multimedia center plays highlights of old French Open matches and features interviews with past French Open winners.