Les Champs Elysees Paris, is known in France as "La plus belle avenue du monde" - the most beautiful avenue in the world. The world-famous boulevard has long been a part of French history, dating back to 1616 when it consisted of a series of fields. How did it become the famous boulevard it is today? When Marie de Medicis gave orders to expand the gardens of the Palais des Tuileries, Andre Le Notre, the royal gardener, was instructed to plant an arbour of trees, known as the Grand Cours (the Great Way). Over time its name changed to "Champs Elysees," French for 'Elysian Fields.' By the end of the 18th century mansions, fountains, and statues began to appear along its length and the street began on appearing on maps.

If you're wondering what you will see when you walk along Les Champs Elysees Paris today, it depends where you look. The upper part of the boulevard houses cafés, restaurants, theatres, boutiques, and upscale shopping. The lower part of the thoroughfare is bordered by trees, flower beds, and grandiose buildings such as the Grand Palais and Theatre Marigny. And if you look straight ahead and behind, the Champs Elysees links the Arc de Triomphe (built by Napoleon Bonaparte in honor of his military victories) to the place de la Concorde. Finally, if you want to take an evening or moonlight stroll in Paris, walk down the Champs Elysees at night, when the entire area all lit up. 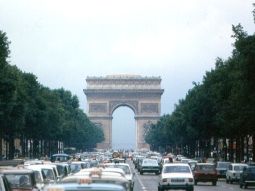 Tourists aren't the only people visiting Les Champs Elysees Paris, however. The avenue is the site of many national celebrations, including the Bastille Day military parade and state processions. Moreover, it is the annual final stage of the Tour de France, Europe's cycling competition, attracting millions of sports fans and supporters from all over the world. And if you happen to be visiting Paris during Christmastime or New Years, head over and join the masses partying on the brilliantly lit and beautifully decorated avenue. And by the way, if you want to catch a magnificent view of the city and snap some unforgettable pictures, you can actually climb up to the top of the Arc de Triomphe. Better put your walking shoes on, however, since it's a full 280 stairs you'll need to climb!

Of course, you'll need a place to stay while you are in Paris. If you can afford to splurge and truly make your trip the experience of a lifetime, consider one of the four- or five-star hotels located along Les Champs Elysees Paris. Since many of the city's main attractions are located in the same region, you will also find yourself within walking distance or only a short drive away from the Louvre Museum, the Eiffel Tower, the Convention Center, and la Defense Business Centre. And if you need some R&R and fresh air, head over to the sprawling Parc Monceau for a picnic or to simply lie down and close your eyes…