The most prestigious French film award as of 2011 is the Palme d'Or (in English, Golden Palm), handed out at the end of the annual Cannes Film Festival to the director of the best feature film in the competition. However, when the Festival first began in 1939 and until 1954, the highest prize was called the Grand Prix du Festival International du Film. For the next ten years, the award was changed to the Palme d'Or, however it was abandoned in 1964 (due to copyright issues with the Palme) and changed once again to Grand Prix du Festival International du Film. Then in 1975 until today, the award's name reverted to Palme d'Or, or Golden Palm.

If you are not familiar with the history of the Cannes Film Festival and its coveted French film award, here's the scoop. "Le Festival de Cannes" is the most revered, high-status, popular international film festival in the world. It takes place annually in May at the Palais des Festivals in the city of Cannes, situated in Southern France on the shores of the French Riviera. Hollywood's most glamorous stars and the biggest names in showbiz attend the event, making the Cannes Film Festival the biggest contemporary platform for movies and especially for European films.

The first festival was scheduled to begin in 1939 but was ultimately postponed until 1946 due to the outbreak of World War II. The first show was a smashing success and its popularity has not waned since. 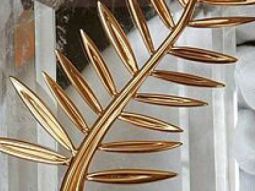 You're probably wondering: Who decides which film walks away with the acclaimed French film award? Since 1955, this fate has been decided by a jury comprised of a leader and a group of successful people from various sectors of society, who must choose between the pool of movies which are part of the "selection officielle" or official selection.

In addition to the Golden Palm, many different movie-making awards are distributed, including Best Actor Female, Best Actor Male, Best Director and Best Screenplay. Over the years new prizes have been also introduced, such as the Golden Camera (awarded to the first best film chosen from the Director's Fortnight and the International Critics Week), the France Culture Award (awarded to the best unknown cinematographer of the year), and Award of the Youth (decided by a panel of seven young European cineastes aged 18-25).

If you're curious what the celebrated French film award looks like, here's the wrap: Over the years, several new designs have been submitted from contemporary artists. During the 1980s the prize transformed from a round to a pyramidal pedestal bearing the palm. In 1992 the Palme was redesigned into a hand-cut crystal piece of work. In the current design, introduced in 1977 by Caroline Scheufele, a single piece of cut crystal provides a cushion for the 24-carat golden palm. The entire prize is hand cast into a mould and presented to the winner in a blue Morocco leather case.