The weather in Paris France is an important part of planning your dream vacation. After all, standing outside in line is part and parcel of visiting Paris's number one attraction: The Eiffel Tower. You can also expect to be waiting in queue to get into the Louvre Museum (where you can see Leonardo da Vinci's portrait of the Mona Lisa) and when you visit the famous Notre Dame Cathedral. Furthermore, as you walk around Montmartre, explore the Latin Quarter, or relax at a sidewalk cafe near the Sorbonne, you'll want to know whether it's your walking shoes you should be wearing, or a pair of rain boots or winter boots! And whether you march through the Arc de Triomphe and down the Champs Elysees during the day or decide take a nighttime stroll down the lit-up boulevard, you'll to want to know what kind of weather in Paris France to expect.

According to the World Weather Organization, during July and August the temperature in Paris peaks at about 76 degrees. In May, September, and October you can expect temperatures in the 60s. The temperatures drop into the 50s during March, April, and November, and reach their lowest, into the 40s, from December through to February. From a practical point of view, the summer months in Paris tend to be the most crowded, meaning longer waits and more expensive airfare. Therefore the off-seasons, when the kids are in school and when the weather in Paris France is comfortable (i.e. during the months of September and May) may be the perfect time to plan your trip to the region. 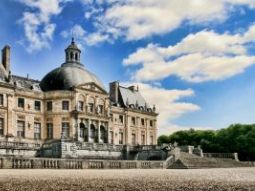 Of course, if you're flying all the way to France, Paris is only one of the many cities you'll want to visit. There is also Normandy, Burgundy, Toulouse, Marseilles, Provence, Nice, Cannes, St. Tropez, Corsica, Alsace, Strasbourg, and many more. Similarly, the landscape in France is extremely diverse. On one hand there are mountainous regions, such as the French Alps, and then there are the coastal regions running along the Mediterranean, French Riviera- Côte d'Azur. So how can you determine in advance what time of year offers the best weather for traveling? Moreover, some of France's mountainous areas are very hot during the summer yet icy and even snowy during December and January.

So here is a general 'rule of thumb' when it comes to determining climate patterns for travel. You can expect a Mediterranean type of climate - meaning hot dry summers and warm wet winters - when visiting countries which lie close to the Mediterranean Sea, such as the south of France. You can expect a British type of climate - meaning cool summers and mild winters - in the Northwestern part of Europe, including most parts of France except for southern France.

You now have a general year-round forecast to help you determine the weather in Paris France! So pack your bags, head for the airport, and have a safe flight!