Facts about the Louvre

Facts about the Louvre abound! One of the world's largest and most renowned museums of art, the Musee du Louvre is a central landmark in the city of Paris. Over eight million people, 65% of them international tourists, come to view its more than 35,000 pieces of work and exhibits each year. Located on the banks of the River Seine, the Louvre is close to all the attractions and amenities of Paris and is the place to visit if you want to see masterpieces created by artists such as Leonardo da Vinci, Rembrandt, Raphael, and Caravaggio. The Louvre's most famous painting is the portrait of the Mona Lisa, whose enigmatic smile has been the subject of conversation and controversy among kings, emperors, and the public for centuries. A special room was built exclusively to house the Mona Lisa, which is encased in bulletproof glass and protected in a climate-controlled environment.

However, here are some less well-known facts about the Louvre. Did you know that in addition to its collections of paintings, the Louvre contains prints and drawings, sculptures and artifacts from ancient Egypt and Greece, Near Eastern and Roman antiquities, as well as Islamic Art? Moreover, some of the museum's statues and sculptures are located outside, as the Louvre incorporates the Tuileries Gardens. And if you are standing on the outside, it's easy to recognize the Louvre on account of the mesmerizing glass pyramid located in its central courtyard, which serves as the main entranceway to the museum. 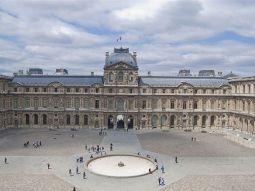 Photo by: King Of Hearts

If you are a history buff, here are the historical facts about the Louvre:

Finally, here are some miscellaneous facts about the Louvre:

Tickets to The Louvre