Looking for facts on Toulouse France? Then you've come to the right place!

Let's start with the physical facts. If you look on your map of France, you will find Toulouse located in the Midi-Pyrenees region of southwestern France. It lies on the banks of the Garonne, Touch, and Hers-Mort Rivers and is crossed by two canals. While it boasts over 2,000 years of history, modern-day Toulouse is France's fourth largest city whose claim to fame is its booming aerospace industry.

And here are some miscellaneous facts on Toulouse France: 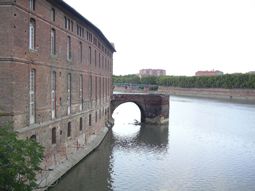 Of course, all the facts on Toulouse France won't do you any good unless you know how to get there! Here is some travel information on how to reach Toulouse:

However, by far the most interesting fact about Toulouse is that it leads the aerospace industry in all of Europe. It is home to both the SPOT satellite and the CNES's Toulouse Space Center (CNES, or Center National D'Etudes Spatiales, being the space agency of the French government). If space technology sends your mind into orbit, however, and has you seeing stars, simply enjoy a day of fun at Toulouse's most popular attraction: The Cite de l'Espace (the City of Space).

The focus of this famed theme park is the conquest of space. It features a planetarium with a mind-blowing light show, a huge Imax screen, and interactive exhibits for the whole family. If all of these facts on Toulouse France have peaked your enthusiasm and interest, be sure to ask your travel agent or travel guide to put Toulouse on your itinerary and then prepare for the trip of a lifetime!