Who Designed the Eiffel Tower?

Who designed the Eiffel Tower? Most people don't know this, but the Eiffel Tower – otherwise known as the Lady of Iron – was conceived of and designed by same engineer who is credited with designing the Statue of Liberty in the year 1885! Even before designing the Eiffel Tower (built between 1887 and1889), this same person had earned his name as an expert in building metal bridges and railways. He built the 525-feet-long Ponte Maria Pia Bridge in Portugal, as well as the Garabit viaduct railway bridge in 1884.

So in fact, who designed the Eiffel Tower? By no coincidence, it was Alexander Gustave Eiffel, born December 15, 1832. After studying architectural engineering, it wasn't long before he began to enthrall the world with his masterful creations. For instance, did you know that it took 18,038 pieces of iron fitted together with three million rivets to build the Eiffel Tower? The structure stands at an astounding 1,056 feet and its latticed tower is visible from any part of the City of Paris! Moreover, the Eiffel Tower has been deemed one of the Seven Wonders of the World and is said to be the most recognizable structure on earth. 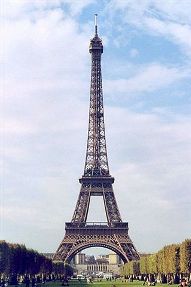 So now that we know who designed the Eiffel Tower, the next question is why it was built. Despite its world-wide fame, most people aren't familiar with the history of the Eiffel Tower. The truth is that this iconic structure was slated to be built for the 1888 Universal Exposition in Barcelona, Spain. However the Barcelona City Hall voted against the proposal, claiming the tower was too expensive and did not suit the style of the city. These events brought Gustav Eiffel and his plans to Paris, where the tower was initially constructed as a showpiece for the 1889 Paris Exhibition, which celebrated the 100th anniversary of the French Revolution. The purpose was to showcase the technological advancements and beauty of France, however the tower wasn't meant to stand for more than three years. Yet despite initial opposition by the people of Paris, appreciation for the magnificent tower and its rare architectural model grew. Today the Eiffel Tower is a source of pride and national identity for the people of France and it brings millions of visitors to the region every year.

Now if you answered the question, who designed the Eiffel Tower, correctly, see if you are familiar with this next little-known piece of information. Did you know that the top of the Eiffel Tower to this day is used as a radio transmission tower, weather station, and navigation point? Furthermore, did you know that many scientific and weather-related experiments were conducted atop the tower? In fact, had this use not been discovered, the Eiffel Tower in its early years would have faced demolition.