French Guiana food is as diverse and flavorful as the eclectic mix of cultures in French Guiana itself. Creole food is common, as are Caribbean style dishes and Oriental cuisine, including Chinese and Vietnamese food. Seafood and shrimp are a mainstay of meals, with rice a popular side dish. In fact, French Guiana's leading economical resources are its seafood and shrimp industries, with second place going to its space agency (the French Space Center located in Kourou). Sugar cane is one of the major crops, and beer and rum are also locally produced – giving rise to sweet, rich-flavored deserts.

Geographically, you can find French Guiana on the map between Brazil and Suriname or on the Caribbean coast of South America. Despite its name, French Guiana is not part of France; however politically it is a non-sovereign overseas department (département d'outre-mer) of France. The highly mixed ethnic population has a great impact on French Guiana food, and thus there is no one cooking style which defines it. However, the Indian, Chinese, African, French, and Spanish influences on the culture have given rise to a Guiana cuisine which features green peppers, onions, celery, spicy sauces, fried meets, and seafood. Vegetables are prepared in many different ways, adding color and flavor to any dish. 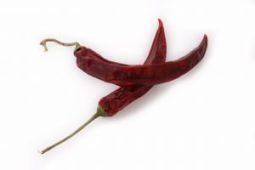 However, by far the most distinctive French Guiana food is the cayenne pepper, also known as red pepper, hot chili pepper, Guiana spice, bird pepper, and aleva. It is named after the capital city of French Guiana - Cayenne - and is related to the wider family of jalapenos and bell peppers. Cayenne comes whole, in powder form, and as a thin sauce, and is used in the preparation of spicy sauces and dishes. Historically, since the 17th century it has been used medicinally as a herbal supplement.

If you, like so many others, enjoy the taste of cayenne in your cooking, take heed of this warning from the experts: Adding to much of this hot and spicy French Guiana food –used dry, as a powder, or eaten raw - will bring tears to your eyes and a burning sensation to your stomach! Similarly, the flavor of the cayenne red chili pepper is so powerful that it can easily dominate and overpower all the other ingredients in your recipe, making what you are preparing impossible to digest. Most recently, cayenne - in delicate amounts - is even being used as an ingredient to make chocolate truffles, and it has also long been used in the preparation of certain beverages.

This great fusion of French Guiana food can be tasted and enjoyed at the French Guiana Carnival, which takes place on weekends throughout January and February each year. In addition to the street parades, street dancing, colorful floats, Caribbean costumes, masked balls, brass bands, and African-rhythm music, you can also enjoy drinking champagne and eating galette des rois (cake of kings), which is typically flavored with coconut or guava.