Many girl names have their origins in the French culture and heritage. In fact, in France, baby girls were traditionally named using the first name of both of their grandmothers (and likewise for baby boys, who were given the first name of each of their grandfathers). Historically, during the reign of Napoleon, French law required all children to be named after a saint from the Roman Catholic Church and for their names to be officially registered. 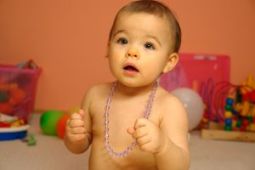 Fortunately, nowadays you have much more freedom when it comes to choosing French girls names. If you visit Paris, some of the most common female names you might hear as you walk around or relax at a sidewalk café are: Dominique, Desintee, Marie, Blanche, Angelique, Alisanne, Simone, Adèle, Clarisse, Charline, Paulette, Brettany, Jocelyn, and Adalina. Naming a child after French cities is another growing trend, as are names related to nature, colors, the four seasons, heroines, and more. Of course, if you have some knowledge of the French language, you can come up with your own original baby French name. However a word of warning from the experts: Keep in mind that your child will be carrying this name for the rest of his/her life, so choose judiciously, keeping the kids' best interest in mind.

In French, many of the same names are used for both genders, with some slight variation between them. For example, the female version of the boy's name Jean is Jeanne; likewise the female conversion of Paul and Jacques are Paulette and Jacqueline. Hyphenated names for girls are also common, such as Marie-Claire or Angelina-Clarice. However there are also many modern French girls names, such as the current chart-topping and high-ranking name Oceane, which means ocean, and which is favored by sun, water, and sea lovers.

Unbeknownst to most people, some well-known French girls names actually mean something. For example, the name Paris means "graceful woman," and the name Avril translates into April. And if you like this 'meaningful' trend, consider also the names Dyana, meaning "divine," or Trinette, which translated means "little innocent."