Looking for French bulldog names? The Internet is a great place to start, where you will find long lists of name suggestions for male dogs and female dogs in every language. You can search for names by category, by color, by appearance, by breed, and even by demeanor! Did you know that the French bulldog actually originated in England? This cute, pug-like dog tends to be muscular and compact with a solid bone structure.

So how did the name "French" bulldog come about? The Artisans of England weren't happy with the original bulldog breed, which was too large for their liking. Later, the French bred the dog with French terriers, producing the smaller French bulldog which became popular in France and which we all know and love today. 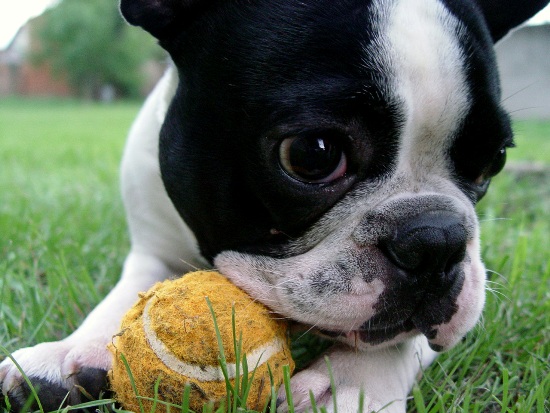 To come up with ideas for French bulldog names, you might be inspired by the French bulldog's appearance. It has a smooth coat, a large square head, bat ears, and dark eyes which are wide-set and tend to melt the eyes of the beholder. French bulldogs weigh between 20-30 pounds and measure about 12 inches in height from the shoulder down. When it comes to color, not all French bulldogs are the same. Some are light brown, some are dark brown, and some have a patterned coat or other distinctive markings. For brown dogs, some French bulldog names to consider are Chocolat (French for chocolate), Choco, or even Toberlone and Toby, a name taken from the famous chocolate bar.

In terms of personality, French bulldogs often sport an intelligent expression and are very curious, playful, and even comical in their antics. They tend to from a strong bond with one particular person, but are affectionate and loving to all â€“ making them a great pooch for families with children. At the same time, French bulldogs are incredibly alert, probably thanks to their heritage, as their ancestors were used as watchdogs. Additional French bulldog names to consider are Aime (meaning "loved"), Paris, Beau, (meaning "handsome"), Valiant, a reference to the brave French knights of yesteryears, Napoleon, and Panache (meaning "flair").

Other dog breeds directly related to France are the French poodle (the official dog of the country), the Bichon Frise, known for their stylish, glamorous looks, and the Beauceron, an ancient breed which served as a herding dog for centuries in France. The Beauceron is also known as Bas Rouge, meaning red stockings, which is an apt description of the dog's physical appearance, which features red on all four legs and red marking on other parts of its body. If you're not familiar with these dogs, they appear much like a Doberman.

Depending on the color, sex, and personality of your dog, additional French dog names to consider are: Etoile, Amand, Felix, Pierre, Nicolette, Neige, Blanche, Poupi, Doux, Chantilly, Pinot, Flocon, Olivier, Arette, Penelope, Brie, and Angeline. For more French bulldog names and name suggestions for French poodles or any other breed, simply keep on searching online, where you will have access to long lists of French names for dogs of all types.