Looking for the best French onion soup recipe? Well, you're going to find more than one recipe claiming that top spot since French onion soup is one of the most popular and tastiest soups around. Nothing beats French onion soup when it comes to flavor, and it is versatile enough to be enjoyed at home on a cold day by the fireplace or to be served as a fancy appetizer at an elegant dinner party or a fancy restaurant. 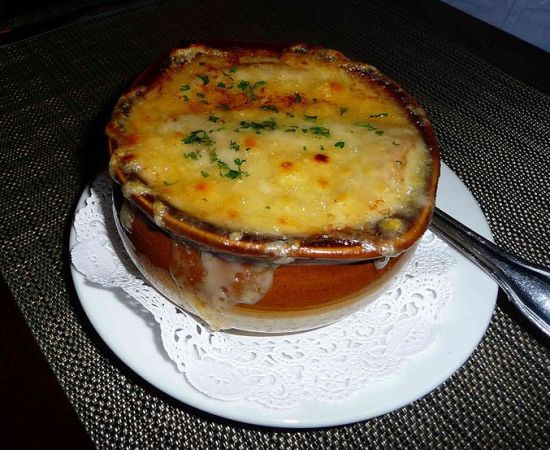 The next tip for preparing the best French onion soup recipe has to do with the crouton-and-cheese topping. French onion soup is topped with croutons or with a slice of French bread or baguette, over which cheese is melted. If you have oven-proof bowls, you can broil the cheese-topped bread in the oven; otherwise it can be prepared in a broiler on the side. For even more flavor, rub a clove of garlic over the toast before adding the cheese.

In case you're interested in the history of the best French onion soup recipe, it is said that soup originated in early Roman times, when it was known as Gaul. The modern recipe is believed to have emerged in 18th-century France, when according to some sources French onion soup was considered a poor man's soup invented by the silk workers in Lyon. Other sources, however, cite King Louis XV as the first person to have cooked chunks of onion in butter and champagne as his midnight snack.

Halve onions and cut lengthwise into thin slices. Melt butter in a skillet. Add a layer of sliced onions and season with salt. Continue to add layers of onion slices and salt until all onion slices have been used. Simmer without stirring for 15 -20 minutes, after which time the onions should have turned brown. Pour in wine and raise the temperature until the wine becomes syrupy. Add chicken broth, beef consume, apple cider, and herbs. Simmer for about 20 minutes.

Set your oven to broiler. Cut bread into circular pieces which will fit inside ovenproof soup bowls. Place bread slices on a baking sheet and broil for one minute. Pour soup into ovenproof bowls (adding a touch of optional cognac or herbs), placing bread on top of the soup with toasted side up. Sprinkle the bread with shredded cheese and broil for about 2 minutes until the cheese begins to bubble.